NC State physicists found superfluorescence in nanocrystals at room temperature — a surprising discovery that could impact the future of technology and cybersecurity.

When Shuang Fang Lim, associate professor of physics, and her former postdoctoral researcher, Kory Green, first noticed a burst of light emitting from nanocrystals at room temperature during a laser experiment, they thought it must have been an error.

The phenomenon of atoms synchronizing within a material and simultaneously emitting a burst of light is known as superfluorescence, and its occurrence at room temperature is highly unusual. Materials must typically be cooled to achieve the effect.

“We thought there must be some funny LED light in the room bouncing around,” said Lim. “So we bought masking tape and started taping up all those potential light sources.”

The experiment was originally part of a collaboration with the University of Massachusetts Chan Medical School to synthesize nanocrystals and make them brighter to improve optical applications.

“UMass wanted to find a way to make the nanocrystals brighter,” said Lim. “They wanted to make them more efficient and brighter.”

But she and Green found much, much more.

The Significance of Superfluorescence

After long nights in the lab studying the phenomenon, Green determined that at sufficient density of ions in the nanocrystals, superfluorescence could take place at room temperature.

As far as Lim knows, NC State researchers are the only ones that have discovered room temperature superfluorescence in a solid state.

In the future, the discovery could lead to the development of microchips with better heat management and faster processing speeds for consumer and military devices. Temperature affects the performance of current semiconductor microchips in computing devices, which sometimes leads to heat dissipation and power consumption problems.

“When your cell phone or your computer get hot, processing speeds slow down. But optical transistors generate negligible amounts of heat, so they don’t have that problem,” said Lim.

The nanocrystals that Lim and Green worked with are based on photons, meaning they can send signals at the speed of light without heating up. The research also showed that the nanocrystals can produce a pulse sequence with a fixed time interval, indicating that they could become optical timers.

“The other thing is that we can actually make them different colors, so each color is a different type of signal on the microchip, which enables multiplexed signaling,” said Lim.

Optical signals don’t leave electromagnetic footprints the way metals and semiconductors do, which could mean that superfluorescence could help strengthen cybersecurity as well, particularly in the military sector.

“There’s less electromagnetic interference, so this is actually good for communication security,” said Lim. “This could be incorporated in most military communication systems, or even their fiber or cable optics, to protect communications.”

The Challenges of Studying Superfluorescence

For Green, the process of studying superfluorescence was time-consuming and challenging.

“These experiments are quite difficult from a technical standpoint based on the limits imposed by the size of the single nanocrystals,” said Green. “The nanocrystal dimensions range from tens to hundreds of nanometers, and you can’t easily visualize anything like that with light. It’s too small.”

But the late nights and early mornings at the lab paid off. Not only did he have the opportunity to contribute to trailblazing research, but the skills he learned along the way have served him well in his career.

“I have used all the skills that I picked up in the lab in all my positions since. I’m still in optics, but now I work with different types of material,” said Green. “But the way I interact with the materials is the same — I’m measuring similar things, doing spectroscopy, doing different types of experiments on light, essentially.”

He still considers the research among the most fascinating work he’s been a part of.

“The superfluorescence research was the most interesting thing I’ve worked on, definitely, because it wasn’t something I expected from the material,” he said. “I’m excited to see what people do with it.” 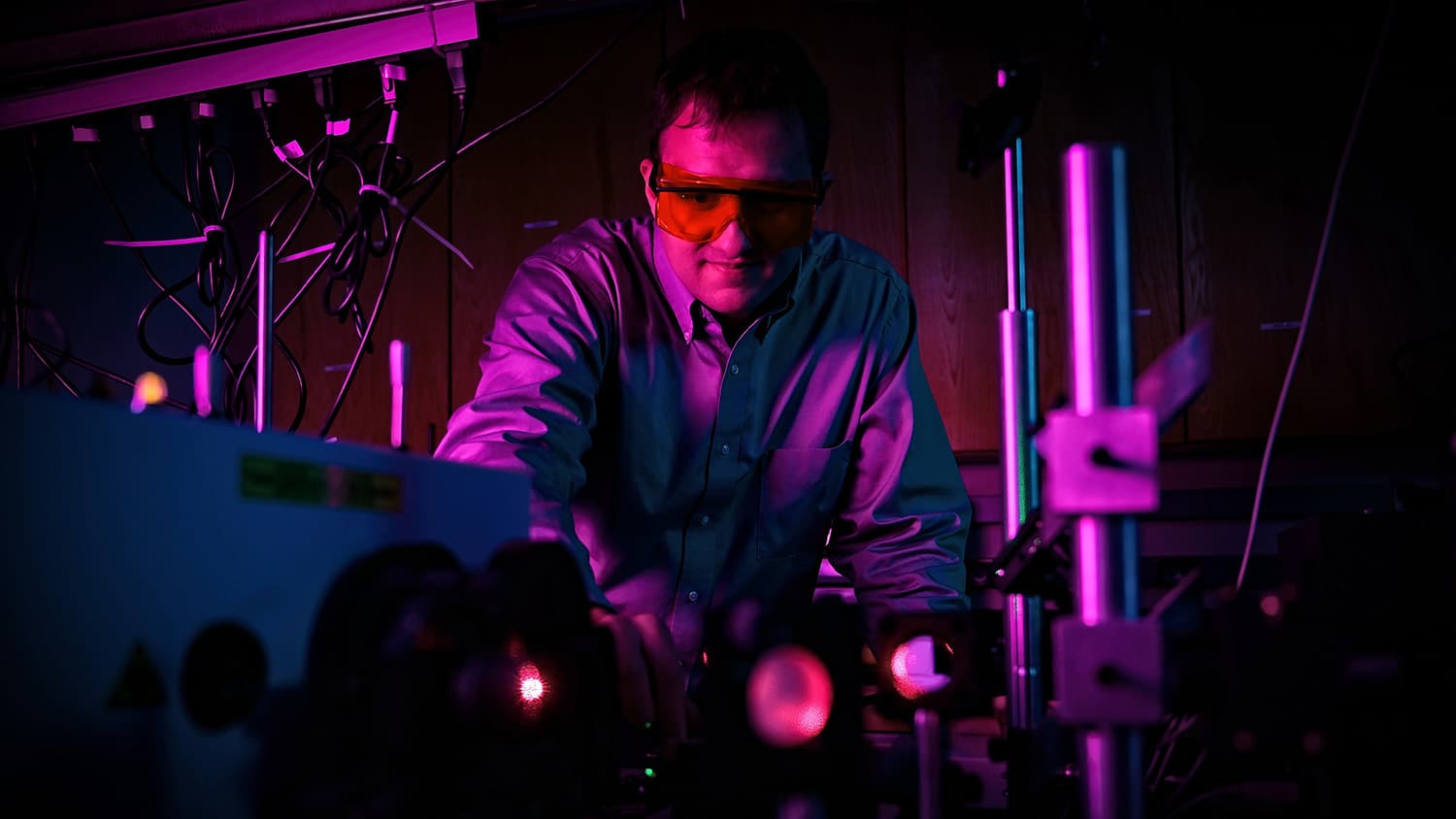 Explore the Department of Physics