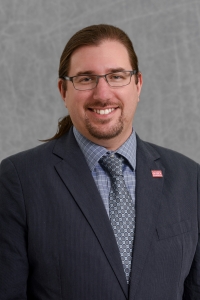 Adam Hartstone-Rose, a prominent biologist with significant experience in student engagement, has been named the new associate dean for academic affairs in NC State’s College of Sciences. He assumed his new role on October 2.

Prior to joining NC State, Hartstone-Rose was an associate professor of cell biology and anatomy at the University of South Carolina School of Medicine. He was also an adjunct associate professor of anthropology and a member of the core faculty of the biomedical engineering program at the university and an adjunct scientist at the Riverbanks Zoo and Garden in Columbia, S.C.

Hartstone-Rose will lead the college’s Office of Academic Affairs, which oversees student-centered programming and engagement, curricula development and assessment, enrollment management, advising and scholarships. The office provides resources for diverse students and other services to help students thrive academically. Hartstone-Rose will focus on developing, implementing and assessing student and educational experiences that enhance human interaction, integrate innovative technologies and provide practical experiences that connect the college’s more than 3,700 students to the world around us.

In addition to his research in biological anthropology and anatomy, Hartstone-Rose has studied STEM education and administration, including interdisciplinarity and engagement in higher education and how to use public science to engage students and the public. His work has been featured in prominent news outlets including The New York Times, National Geographic and BBC Wildlife Magazine.

Hartstone-Rose also has a strong record of service to students and his university community. He received the Outstanding Faculty Volunteer Award and the Stand Up Carolina Hero Award from the University of South Carolina, as well as the Distinguished Leadership and Service Award from Duke University. He has mentored dozens of undergraduate, graduate and postdoctoral students over his career, including supervising nearly 50 student research projects that received grants, fellowships or awards.

Statistics and COVID-19: Forecasting the Spread