The annual Kwangil Koh Lecture on Mathematics in Our Time has been canceled.

The speaker will be Robert Ghrist, the Andrea Mitchell Penn Integrating Knowledge Professor in the Departments of Mathematics and Electrical/Systems Engineering at the University of Pennsylvania.

Ghrist will speak on “Homology in Data and Networks.” The past 15 years has witnessed a dramatic burst of applications of algebraic topology in the applied sciences, ranging from statistics to networks, neuroscience, optimization and more. This talk will overview some of the most exciting applications of homological methods, with a focus on specific examples, computation and clear visualization of these abstract ideas.

The event is free and open to the public. 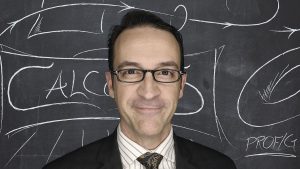 Ghrist is also a dedicated expositor and communicator of mathematics, with teaching awards that include the MAA James Crawford Prize, Penn’s Lindback Award and the S. Reid Warren Award in Engineering at Penn. Ghrist is the author and animator of popular YouTube video texts, as well as an online course on Coursera featured in the New York Times, BoingBoing and Gizmodo.