The featured speaker will be Kevin Clark, a computer science alumnus who is currently a professor of learning technologies and founding director of the Center for Digital Media Innovation and Diversity at George Mason University. Clark’s talk will be entitled, “Diversity in STEM: Believing Is Seeing.”

This event is free and open to the public, but registration is required.

The event is at capacity, and registration is now closed. Please contact the Sciences Advancement office (sciences-advancement@ncsu.edu) with any questions. 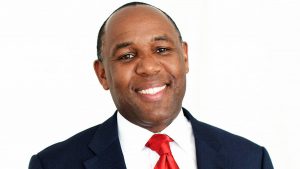 Kevin Clark is a full professor of learning technologies and founding director of the Center for Digital Media Innovation and Diversity at George Mason University. Clark’s research focuses on the role of video games and digital media in broadening participation in STEM, the digital lives of African American families, and issues of diversity in children’s media. Prior to becoming a professor, he was part of an educational technology startup company, and he has extensive experience as a children’s media consultant for organizations like PBS, the Corporation for Public Broadcasting, Cartoon Network, the Jim Henson Company and Disney.

Clark has received numerous awards and honors, including being selected as a fellow for the Annual Television Academy (Emmy) Foundation Faculty Seminar; being recognized by former President Barack Obama as a White House Champion of Change for his work in supporting and accelerating STEM opportunities for diverse students, schools, and communities; and receiving the George Mason University Presidential Medal for Faculty Excellence in Diversity and Inclusion.

Clark is a founding member of NC State’s Society for Multicultural Scientists and holds both a B.S. (1989) and an M.S. (1991) in computer science from NC State and a Ph.D. (1994) in instructional systems (African Studies minor) from Pennsylvania State University.